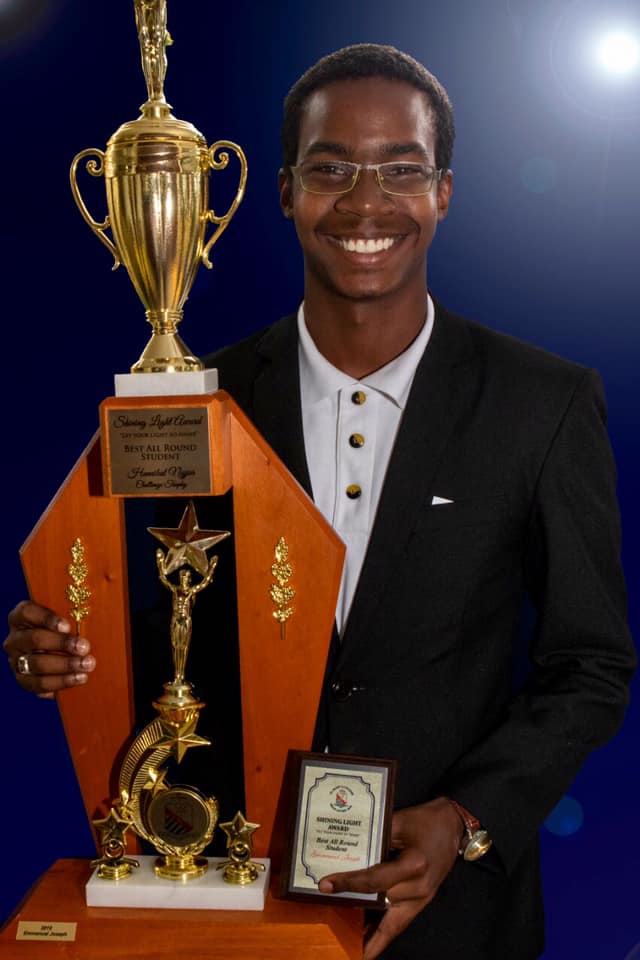 The St. Mary’s College Co-curricular Awards, is held to recognize the outstanding achievements of our scholars who dedicate their time to nurture an active life in various sports and performing arts.

The 19 year old student of the University of the West Indies, is currently pursuing his bachelor of Arts in Literatures in English with the desire to become an educator.

He recently graduated from St. Mary’s College after successfully completing his CAPE examinations. Prior to this, he enjoyed 5 years at Holy Cross College in Arima, earning the self development and academic prowess which allowed him to join the St. Mary’s community.
He is a hard worker and talented musician and poet. His pursuits in the steelpan fraternity has seen him make contributions to the Malabar RC Primary Steel Orchestra, the St. Mary’s College Steel Ensemble and presently a senior member of the Melodians Steel Orchestra, the UWI Arts Steel Ensemble and the captain of the bpRenegades Youth Steel Orchestra. His career as a soloist has also seen achievement as he recently became the winner of the inaugural UWI’s Got Talent competition in October. He has aspirations of becoming an arranger, composer and professional soloist, alongside his desire to be an educator.

Apart from his musical endeavours and academic success, he boasts proudly of his involvement in his parish where he contributes to the Youth Ministry in several capacities being a member of several of the church’s organisations and associations. He is also a member of the 13th Port of Spain Sea Scout Troop where he has served all his life and he is also a recipient of the Chief Scout Award, commemorating his abilities and discipline in his role as a Sea Scout. Along with the aforementioned activities and groups, he engages in several volunteer projects and the occasional Spoken Word Competitions and showcases.

During his short stay at the College, he has represented St. Mary’s College well and was considered the epitome of an outstanding student.
The recipient of the Shining Light Award has effectively balanced his academic career, while making strides in the performing arts. His active participation has contributed not only to his self development causing him to be a shining light in any arena but also upholding the great pride of the old white and blue.

This year’s recipient of the Shining Light Award goes to past pupil, Emmanuel Joseph.